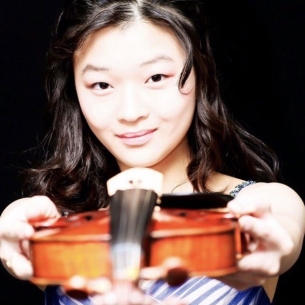 Join us for our third annual Saturdays with the Stulberg event, featuring 2020 Silver Medalist Yeyeong Jin. This online recital series highlights past Stulberg winners and gives the audience the opportunity to reconnect with these young artists to see where they are today!

Grab a cup of coffee and settle in for a wonderful recital with Yeyeong!

Violinist, Yeyeong Jin, 19, was born in South Korea and began her studies at age two. By the age of five, she was winning competitions and appearing as a soloist with orchestras. She won the Kumho-Asiana Cultural Foundation Award, which resulted in the loan of a fine ½ size violin made in 1700, the Carlo Giuseppe Testore.

At nine years of age, violinist Yeyeong Jin was admitted to the prestigious The Curtis Institute of Music in Philadelphia, Pennsylvania. Since then, Yeyeong studies with the renowned pedagogue, Ida Kavafian.

Yeyeong she has appeared in concert numerous times in Field Hall at Curtis as well as at Carnegie Hall and the Verizon Kimmel Center.

Since 2016, Yeyeong became a student of the Perlman Music Program and has been attending every summer and many winters.