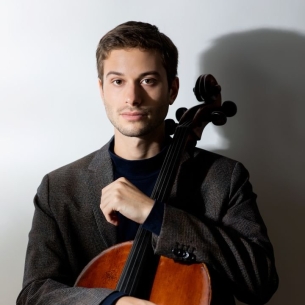 Join us for our third annual Saturdays with the Stulberg event, featuring 2016 Stulberg Gold Medalist, cellist Daniel Hass. This online recital series highlights past Stulberg winners and gives the audience the opportunity to reconnect with these young artists to see where they are today!

Grab a cup of coffee and settle in for a wonderful recital!

Israeli-Canadian cellist Daniel Hass is the First Prize winner of the 2016 Stulberg International String Competition, the 2016 winner of the Canada Council for the Arts Michael Measures Prize, the 2019 winner of The Juilliard Cello Concerto Competition, and the 2021 Sylva Gelber Music Foundation award winner.

A sought after chamber musician in New York City, Daniel frequently performs as a guest artist with the Jupiter Chamber Players, the Omega Ensemble, the Sejong Soloists, and the Andrew Sords Trio, and since 2019 has served as the principal cellist of the Philadelphia-based orchestra Symphony In C. As a member of the avant-garde group Orlando Furioso, lead by Columbia University Scholar Vicente Hansen Atria, Daniel participates in New York City’s time-honored tradition of musical innovation.

Daniel has been featured several times on Canadian Broadcasting Corporation national radio, and on the American radio show ‘From the Top,’ performing alongside renowned musicians such as Grammy-winning composer Danny Elfman.

In addition to his love for performing, Daniel is also a prolific composer and songwriter. His ballet piece Runner’s High for drums, cello, violin, and dance ensemble was premiered by the Revolve Dance Project in July of 2021, and his first piano quartet, written for his colleagues violinist Randall Goosby, violist Jameel Martin, and pianist Derek Wang, will be performed and recorded this coming fall.

Since 2017, Daniel has taught a growing number of private students, and has also taught at public schools as a member of Harmony Program, a music education non-profit organization in New York. He is a mentor of the Las Vegas Young Artists Orchestra since, a tuition-free music program in the State of Nevada, performing and giving masterclasses with the youth orchestra since 2018. In the realm of community outreach, Mr. Hass is a weekly performer for Concerts in Motion, a non-profit organization, bringing live house concerts to elderly and socially isolated individuals throughout New York City.

Daniel is an alum of the Perlman Music Program. He graduated from Juilliard in 2017 as a recipient of the Kovner Fellowship, and in 2021 with a Master’s Degree. There he studied with cellists Timothy Eddy and Joel Krosnick, and violinists Areta Zhulla and Itzhak Perlman.